Upmarket cars sporting a quartet of frowning ‘Chinese Eye’ quad headlights were all the rage in the 1960s. Jensen C-V8, Rolls-Royce Silver Cloud II, Bentley S3, Chrysler 300G/H – they were all at it. But surely the pleasingly aggressive-looking Triumph Vitesse is the most famous of them all. It’s remarkable to think today, then, how close the car came to never getting beyond the design stage.

Standard-Triumph may have enjoyed some glory years during the 1950s with the Triumph TR series, but as the 1960s dawned, it was clear that the company wasn’t in the greatest of financial health. In the event, it was a last-minute rescue package from Leyland Motors in 1961 that finally saved the company.

Project ‘Zobo’ – aka the Herald – went into production two years before Leyland entered the picture, but Standard-Triumph’s increasingly bleak-looking balance books suggested it wouldn’t survive for long. Plans had been in place to revive a curious and oft-maligned 1930s trend for small six-cylinder cars ever since the Herald’s inception, however, and with Leyland’s backing, the car entered development.

Ironically, the initial development hack – nicknamed the Kenilworth Dragster – packed a 2.0-litre Vanguard engine and was used by Technical Chief, Harry Webster, as his own car for several months. For production cars, however, an enlarged version of the Herald’s SC (‘Small Car’) ‘four’ was deemed more appropriate at 1600cc, with twin Solex carburetors upping power to 70bhp.

A Herald gearbox sporting tougher internals and closer ratios – but still no synchromesh on first gear – was deemed sufficient to handle the extra power, but, subtle changes to the suspension aside, the standard chassis was largely retained.

The car survived until 1966, at which point the Vitesse was upgraded with a 2.0-litre engine, stronger gearbox and better brakes, but it wasn’t until the 1968 advent of the Vitesse Mk2 that the swing-axle rear suspension was finally canned.

The factory sold 51,212 examples before it was phased out in 1971 in favour of the new Dolomite range.

No doubt about it: the Triumph Vitesse looks meaner than the proverbial junkyard dog just parked up on your driveway. It’s a good job, then, that it has the mouth to match the trousers, although the six-pot lurking beneath this particular car’s trademark tilt-front bonnet is the 70bhp 1600, not the later 2.0-litre mill, which mustered 95bhp.

It’s an appealing little ‘six’ nonetheless – it’s good for over 80mph in top, and while a 0-60mph time of over 17.5 seconds doesn’t sound like much to write home about, it feels much brisker in practice, not least as it weighs barely 920kg.

As with many six-cylinder engines, though, the Vitesse relies more on low-down torque than peaky horsepower to haul itself along. It’s no sluggard, but it works best when viewed more as a grunty mini-GT than a screaming out-and-out sportscar. It’s a pity, then, this car wasn’t specified with optional Laycock overdrive (which worked on third and top gear) to quieten things down at higher speeds.

Handling is largely benign and predictable at workaday speeds if the driver is smooth and gets his or her braking over and done with before diving into a corner. Provoke the notorious swing-axle rear suspension anywhere near the limit – especially in the wet – however, and it will eventually bite.

An unfortunate quirk of the Vitesse 6’s suspension is that ham-fisted over-exuberance in the bends can tuck a rear wheel into extreme positive camber and throw the car into snap oversteer. The resultant slide is often difficult to catch. Indeed, in its February 1969 test of the 2.0-litre Vitesse, Motor magazine was heard to complain: "One can’t help feeling that the Vitesse might have established a greater niche for itself if it had started life with a live axle."

"The test-drive of a Vitesse 1600 is crucial," says Jigsaw Triumph Specialists’ Mark Field. "Piston slap, which can be easily mistaken for pinking when you back off the throttle while stationary, and/or smoke on the overrun can signal a £450 bill for a new set of pistons. They’re expensive, because they’re only manufactured by a company in Australia. Fail to sort them out, however, and the engine can be damaged beyond reconditioning limits.

"Three-synchro gearbox whine in first is to be expected, but if it occurs in any other gear, it’s a sure sign of collapsing layshaft bearings. Often the best solution is to swap in a four-synchro gearbox from a Mk1 2-litre.

"Adjustable shock absorbers are the best way to tame swing-axle wheel-tuck, although you can fit re-cambered rear springs. As for body rot, check the main chassis rails, preferably with the car up on a ramp – repairs here must be professionally seam-welded for an MoT pass. Also check the outriggers as the body-chassis mounts, which are hidden behind the sills and bottom of the B-posts."

There are plenty of corrosion spots to watch out for, with the rear wings, the spare wheel well in the boot, the door bottoms and the sills (particularly around the attaching screws) prone to the dreaded tin worm.

Check the condition of the one-piece bonnet for signs of overspray or deformation – as the unit is one of the more expensive components to replace, signs of poor repair work can help to indicate if the Vitesse you’re looking at has any front-end collisions hidden in its history.

Pay particular attention to the front and rear wheel-arches, which are double skinned and should be checked carefully around the edges, as these will help indicate the condition of the car’s inner panels.

It also pays to make sure you know exactly what sort of Vitesse you’re inspecting – plenty of the saloon models have been converted into al fresco models, but they’re not as valuable as the factory-built ragtop models. You’ll be able to spotgenuine item by the anti-burst latches on the door and pillars, and the strengthening beams around the B-pillar. The commissioning plate should also read ‘CV’ (for convertible) – a chopped saloon will still have its ‘DL’ code.

Similarly, the early Vitesse 6 models had mesh radiator grilles rather than the horizontal slats of the later two-litre models – if the two don’t match, make sure you ask the seller why.

There are two versions of Triumph’s in-line straight six to choose from – the 1596cc version fitted to the original Vitesse 6 model, and the later 1998cc unit introduced in 1966. It’s a sturdy unit which should be capable of at least 100,000 miles with regular servicing, and its shared heritage with other Triumphs - particularly the GT6 – means it’s well catered for by specialists.

Thrust washers wearing out or dropping out altogether are a known trouble spot. Get a friend to start the car up and depress the clutch pedal while you watch what’s going on beneath the bonnet – if the front crankshaft pulley moves forward, it’s going to need replacing.

It’s also worth checking that the Vitesse you’re looking at has the engine Canley intended – the engine number on the 1596cc engines starts with HB, while the two-litre versions began with TC. If it begins with an M or K it’s come from another Triumph model (or even the Standard Vanguard Six) – not necessarily a bad thing, but a haggling point if the car’s being sold on its originality.

The biggest influence on your Vitesse buying tendencies should be the condition of the chassis – if it needs major surgery the bodywork will have to be in sound condition before it comes off.

Look for signs of accident damage around the front – wrinkles in the rails near to where the wishbones can provide clues to the car’s history – while the worst corrosion spots are towards the rear. Water collects in the dipped areas around the differential, and it can be a tricky area to repair.

Gearboxes generally last well and the clutch should be light and smooth to operate, and check that the overdrive works correctly in both third and fourth.

Check for rattles or clinks coming from underneath the car at the point of setting off – a worn universal joint or a loose bolt where the driveshaft connects to the diff are the likely candidates. Trunnion bearings are also prone to wearing out, particularly on the two-litre models, and any particularly gruesome wear points it not being oiled regularly.

There are no particular horrors to look out for – most of the interior trimmings can be sourced easily if you shop around, although the sun visors unique to the convertible models can be tricky to get hold of.

Check for signs of scuffs or tears around the seats or carpets, and budget accordingly for repairs. Damp in the carpets in either of the footwells can point to corrosion in the metalwork beneath or a roof leak in the convertible models, so use any damp spots as potential bargaining chips.

The Vitesse is rarer and faster than the Herald it’s based on, and thanks to the moody look created by that restyled front end has a character all of its own.

It’s also easy well catered for by Triumph clubs and marque specialists, who will be all too happy to point you in the right direction when it comes to parts and expertise.

Pay over the odds for a rust-afflicted example or a saloon pretending to be a convertible and it’ll be a headache, but do your homework and the right Vitesse is a fun route into six-cylinder route into Triumph ownership. 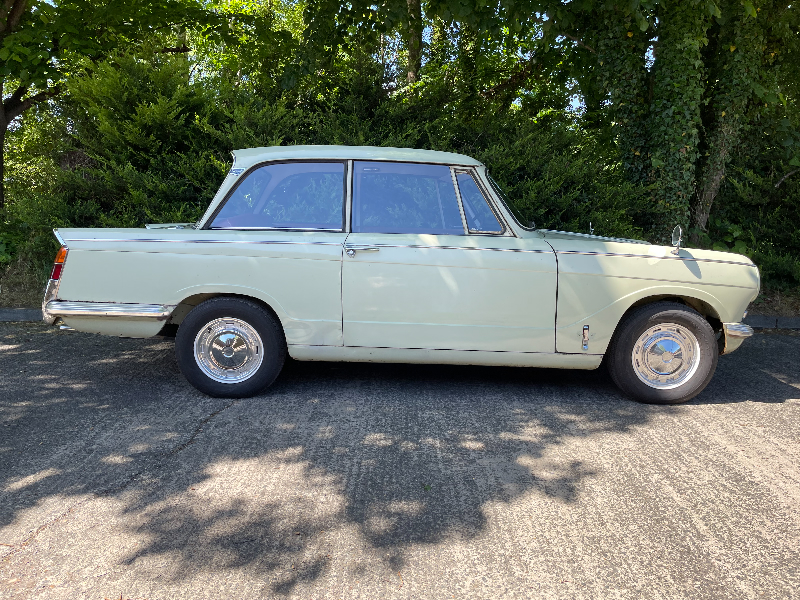 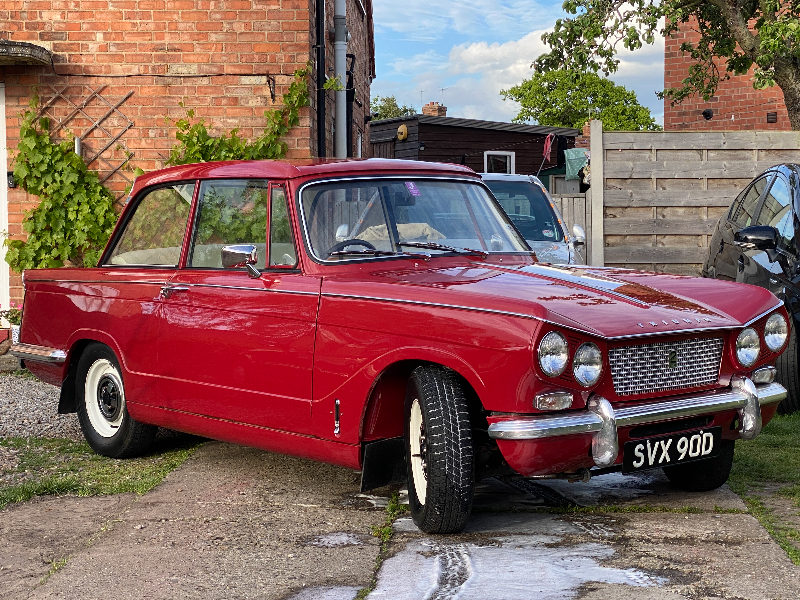 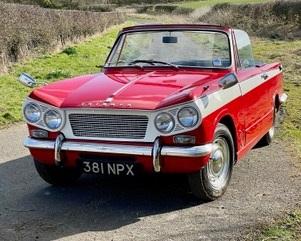