They're prestige and power from different angles. It was the Mercedes-Benz that bettered the Alfa back in the day, but which is better now? 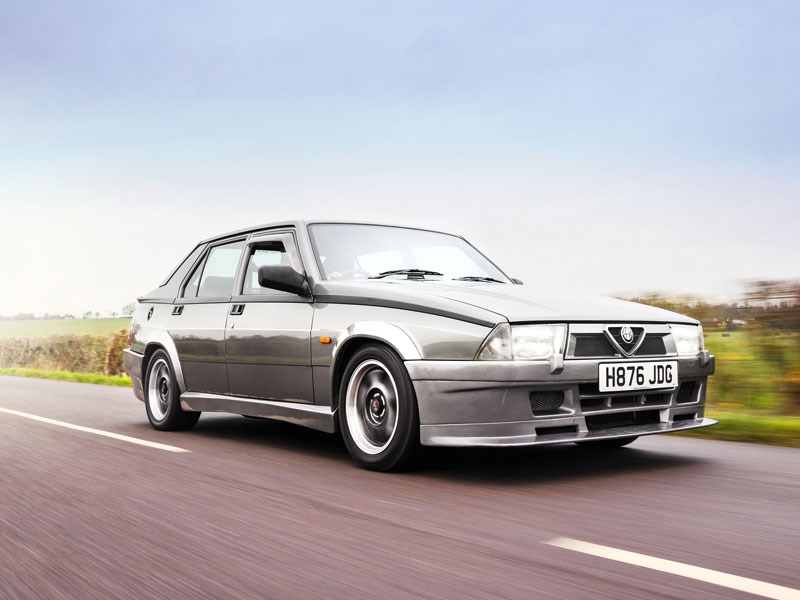 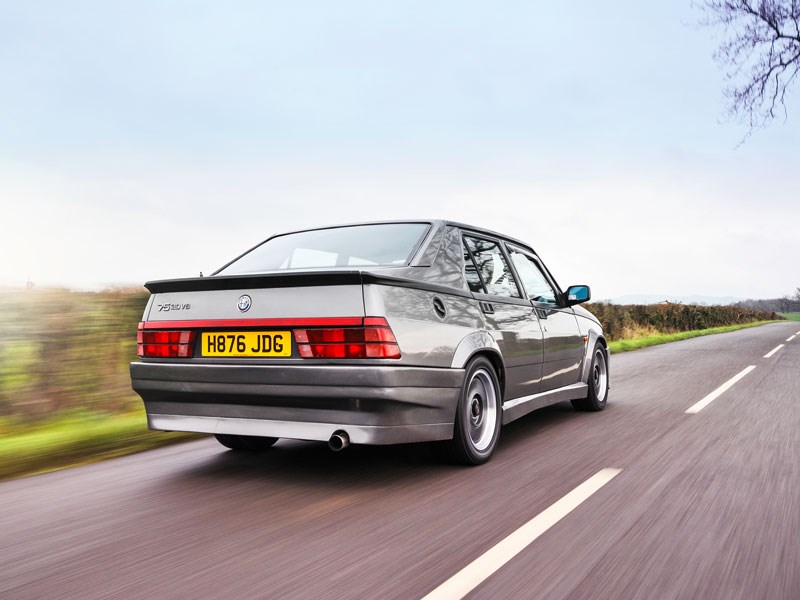 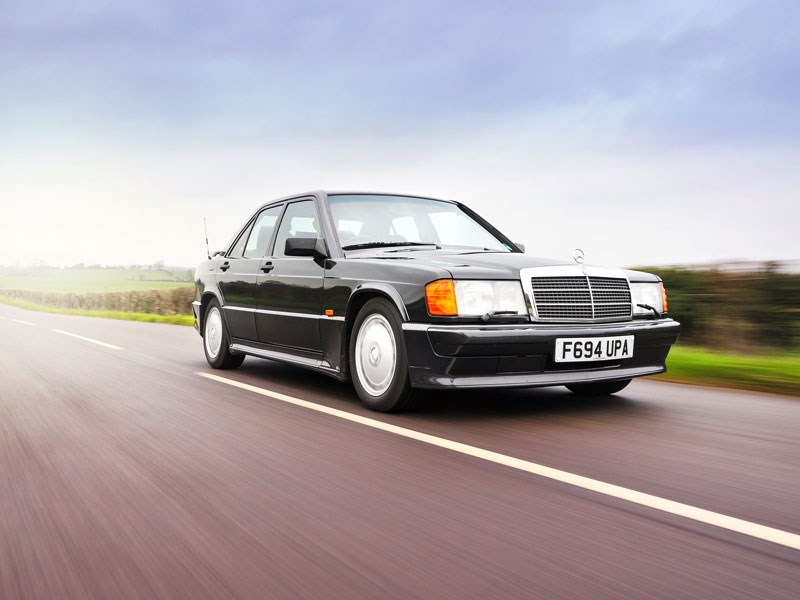 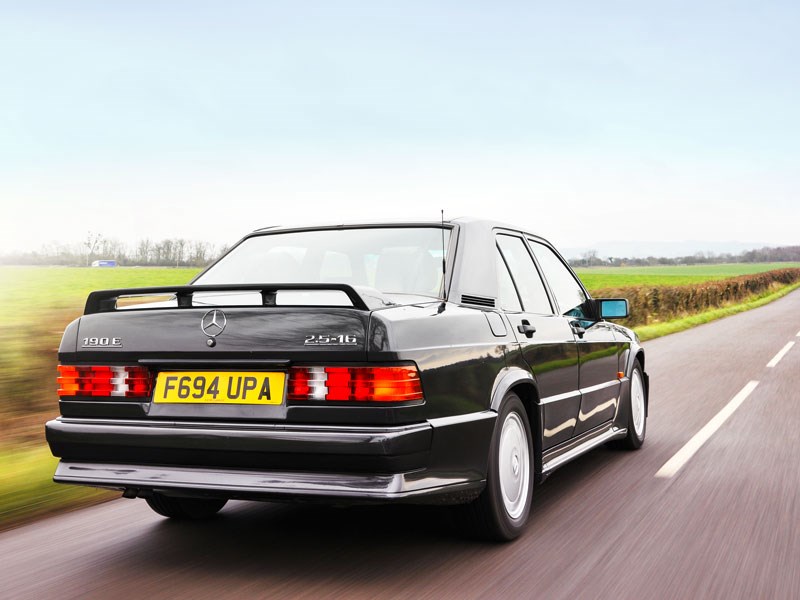 If the 1970s marked the rise of the GTI, then the 1980s was the decade in which affordable high-performance saloons clawed their way to prominence.

While practical pocket rockets stole all the headlines after the launch of the VW Golf GTI, the sports saloon was always the more logical choice for those with more money to spend. The various fuel crises of the 1970s made squeezing extra power out of smaller engines the way to go, but a return to more settled times in the '80s and greater affluence reignited interest in go-faster three-box designs.

There was only so much you could squeeze under the bonnet and into the back of a small hatch. Saloons offered a much more expansive canvas.

It was a wish to enter the 190E into motorsport that led Mercedes-Benz to ask the British Cosworth firm to work on a suitable engine for it. Originally envisaged for rallying, the Cosworth-produced 190E 2.3-16 found its natural home in touring cars instead in 1984.

Homologation rules meant a roadgoing version needed development, which allowed the public to enjoy the fruits of the Anglo-German engineering collaboration. The resultant car was highly capable and very desirable.

It was launched with some fanfare – Mercedes-Benz invited a group of F1 legends – young and old – to a one-off race at the then-new Nűrburgring GP circuit. New boy Ayrton Senna trounced the lot. Meanwhile, Alfa Romeo briefly forgot its financial struggles to commemorate its 75th birthday in 1985 with the appropriately named 75. More a thorough revamp of the nuova Giulietta than a completely new model, it was Alfa’s last offering before Fiat took over, and thus has something of a special place with enthusiasts, especially in V6 form.

The 75 offered superb performance, and also packed in current technology. There was even an onboard computer, which was quite radical for the time. It too was a regular performer on track.

Today, both cars tick a lot of Modern Classics boxes, and (especially in the case of the Alfa Romeo) have price tags that still make them quite attainable. But how well do they compare with each other 30 years after their heyday?

There’s something of the night about the Mercedes-Benz 190E 2.5-16. In menacing blue-black metallic, its brooding persona is relieved only by the sparse areas of brightwork on the grille and the alloys.

Elegant, handsome and balanced, it doesn’t want to draw too much attention to what it’s capable of. The bodykit is subtle, with skirts so tiny they’re the sort of thing Bucks Fizz might have worn for Eurovision. Only the rear spoiler hints that something a bit more special is going on but, by 1980s standards, it’s very restrained. Later evolutions would sprout arches and massive spoilers, but in its purest form the 190E just doesn’t need to show off.

Inside, the sober theme continues. A bank of additional gauges in the centre console is the main pointer to the Mercedes’ secrets, but apart from them, only the checked seats are a major departure from conservatism.

Start the engine and… there’s very little sense of drama. The four-pot whispers away quietly in the background, and even blipping the throttle fails to provoke the sort of raucous response that you feel something tweaked by Cosworth should have. Where’s the roar, the shriek, the anger?

It’s not even apparent when you get underway either. It is extraordinarily smooth for a big capacity four, feeling like it has at least two-more cylinders than there really are. Ride quality is equally silky – the suspension does a masterful job of soaking up knocks before they reach the cabin. It’s not floaty in any way, though.

To properly exploit the automatic 190E, you need to move the switch by the side of the gear selector from ‘E’ (Economy) to ‘S’ (Sport). And when you do, the car suddenly becomes alive, like a sudden injection of adrenaline. Although it’s only the gearbox's programming that's been altered, the whole car feels tighter. There’s a polite pause while kickdown takes a while to think about what it’s being asked to do, but once there you're catapulted forward on a wave of torque. It doesn't last long though, and the result is a car that seems to hide its rampant speed from your senses as soon as they pop up.

On corners, the Cosworth feels unflappable; sure-footed and safe thanks to the big lumps of rubber and low stance. That means predictable handling – even tight bends hold little fear, although there’s perhaps a hint of understeer if you’re too adventurous. But once in tune to the 190E, there’s no need for over-enthusiasm, because the brakes are so responsive they allow you to place the car perfectly.

This car may have excellent performance, but it’s reigned in within well-engineered parameters for the minimum of drama.

The Alfa Romeo makes it patently obvious it’s all about speed. The body kit is much more pronounced than on the 190E, making it look like a riotous racetrack refugee. There’s no beating around the bush here – this is full-bore 1980s aggression.

This car was Alfa Romeo’s 75th birthday present to itself, as well as its enthusiasts, and allowed itself a little creative chaos to celebrate. The blocky, modular dash matches the exterior lines, but it’s how Alfa has laid things out that really sparks the curiosity. The handbrake is an enormous U-handle that looks like you should use two hands to pull it up – or at least get an obliging passenger to help you out. The electric window switches are up in the roof, the door handles are triggers and the radio is right down in front of the gearlever.

From the moment you fire up the V6, it does its best to constantly remind you it’s there. It has a deep, clearly audible growl that pervades the cabin and encourages you to make the most of it. And, unlike on the Mercedes-Benz, toeing the accelerator just makes it sound better still. Already, the Alfa feels like the faster machine even though the stats don’t bear this out. Its bass-heavy soundtrack gives it an all-action flavour.

Having a manual gearbox helps, of course. The free-revving engine encourages you to hold on to the changes later, just to hear that delicious noise. The 75 also feels more responsive than the 190E, both at your right foot on the throttle and your left arm on the gearlever. Change quality is variable on these cars, but this one's been rebuilt, and is as good as it should be. It can be snicked quickly through the unAlfa-like short-throw gate, almost begging you to play with it – a delight when allied with its glorious engine.

The slightest pressure on the throttle urges the Alfa forward. You’d swear it has the better performance of the pair, although the figures say otherwise – probably because it's so vibrant, and telegraphs such a wonderful soundtrack at revs, full and richly timbred. There’s lots of feedback through the steering wheel, broadcasting the road surface like a wasabi-fed cockerel's morning call. The firm ride is jarring over some bumps, but is very well damped. The brakes need a hefty prod to give their best, a reminder of our own mortality.

The Alfa can be tricky in the corners – even at quite moderate speeds, you can feel the rear end get a little twitchy, especially in the wet. So, make sure you keep your wits about you, at least in the twisty bits.

Intimidating? Maybe, but you'll be grinning from ear to ear after you've tackled a favoured B-road at high speed. Then you'll want – sorry, need – to go back and do it again, and again, and again. The Alfa's a gateway drug to pure petrolhead addiction.

This pair is alike in ability but wildly different in execution.

The Alfa is the firecracker of the two, with fingertip-twitching steering feedback, raspy V6 engine note and eye-popping styling. It's a Jack Russell, pulling at the lead, trying to take you into the next bend with a shouty bark. You may feel as if it's always trying to bite you too – but that's the appeal. It's certainly not the looks, or its reputation for brittle reliability, but most cars you'll find now will have been cared-for examples. These are rare now, and prices will only increase as the demand for 1980s cars grows.

The 190E may lack the hardcore immediacy of the Alfa Romeo but its thrills come in its ability to cover vast distances at ICBM-like speeds. It seems bomb-proof and inside, you feel invulnerable to anything that might be thrown at you. It's just you, the car and the road ahead – nothing to worry about, other than the boys in blue, of course.

The 190E is also the car that's shown most growth in the past few years. The best have sprinted towards £20k, and this growth is set to continue.

The 190E is more in demand now than it was when new – it's a car first, and a fast car second. The Alfa Romeo 75, however, is a flawed gem, and one you'll love. Consequently, in a head versus heart decision, we'll take the 75. It's a modern classic that will satisfy your driving passion, but thanks to great specialist support and rising demand, it also stacks up financially.