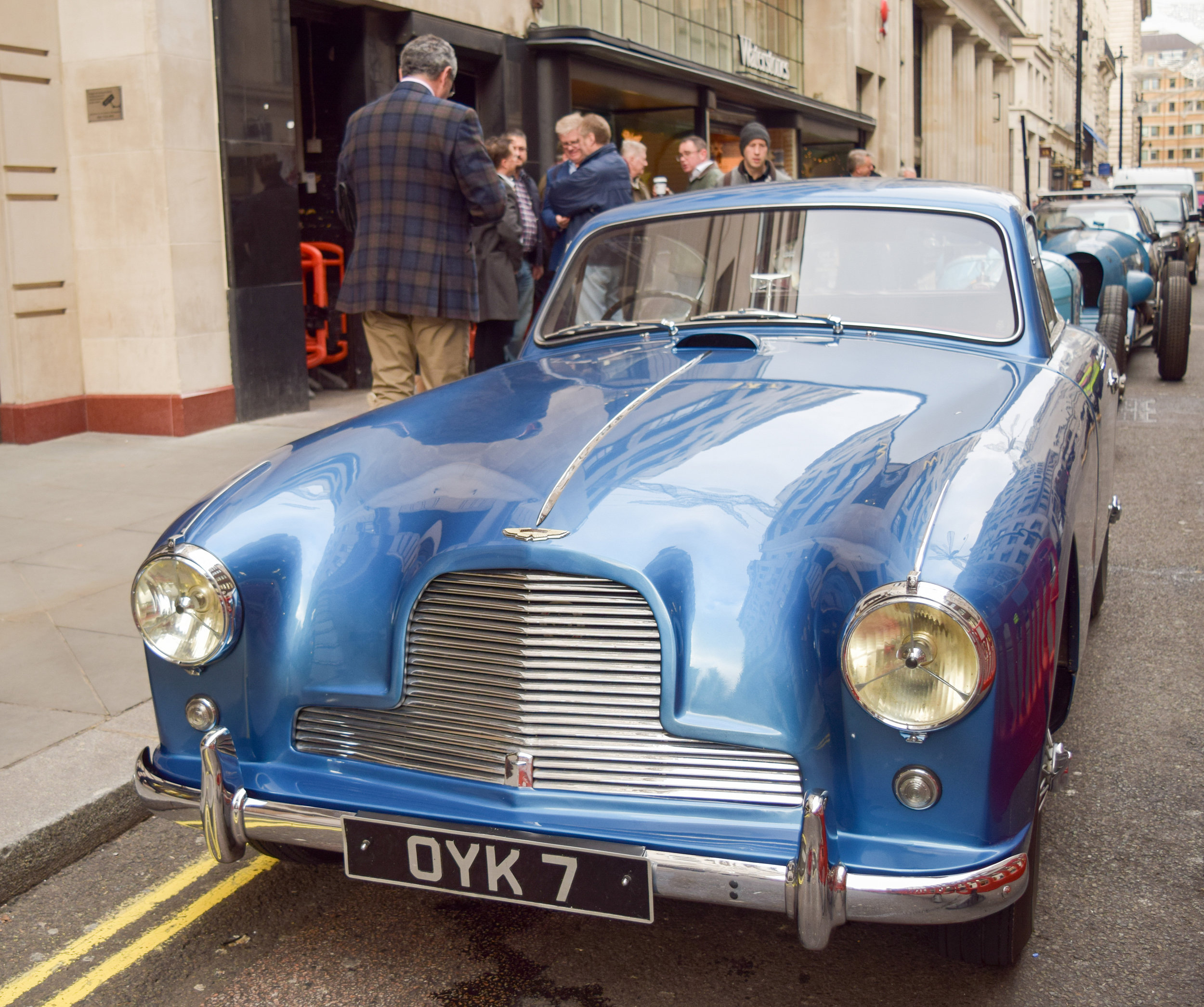 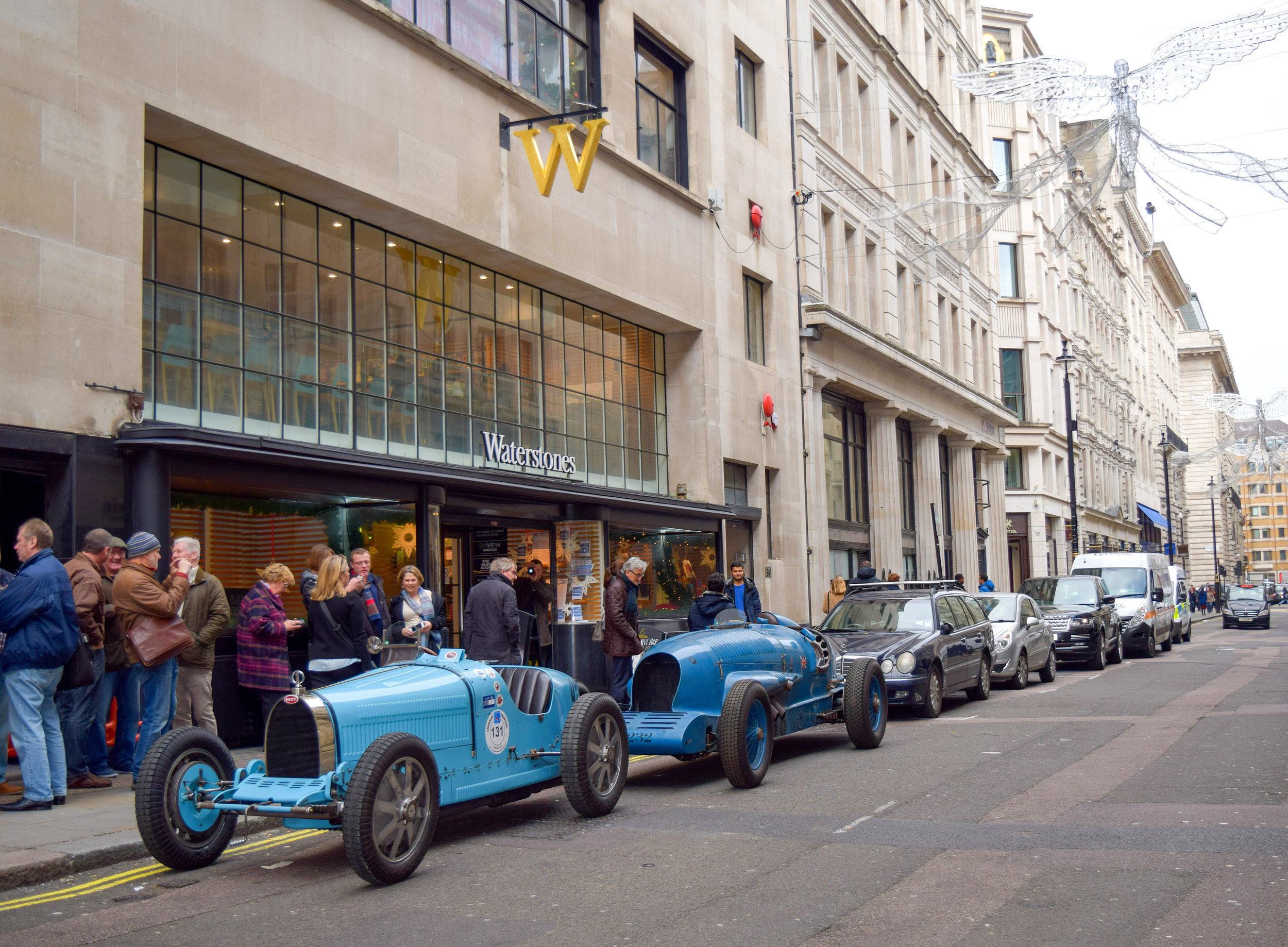 You would be lying to yourself should you claim not to want one of these. 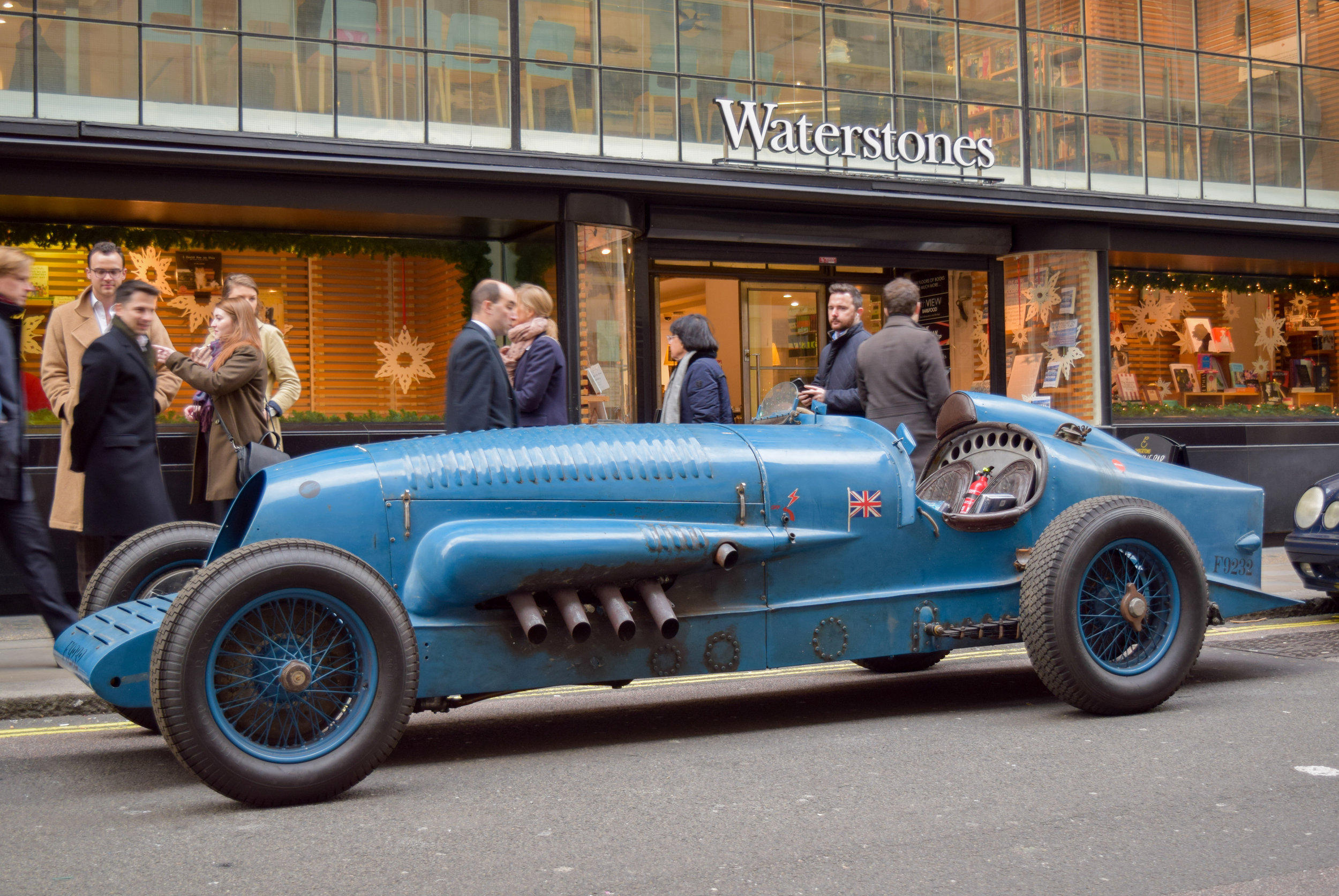 The original land speed record vehicle is considered lost to the ages, with this replica being the closest we will get to Sir Malcolm's 1927 Napier-Campbell Bluebird. 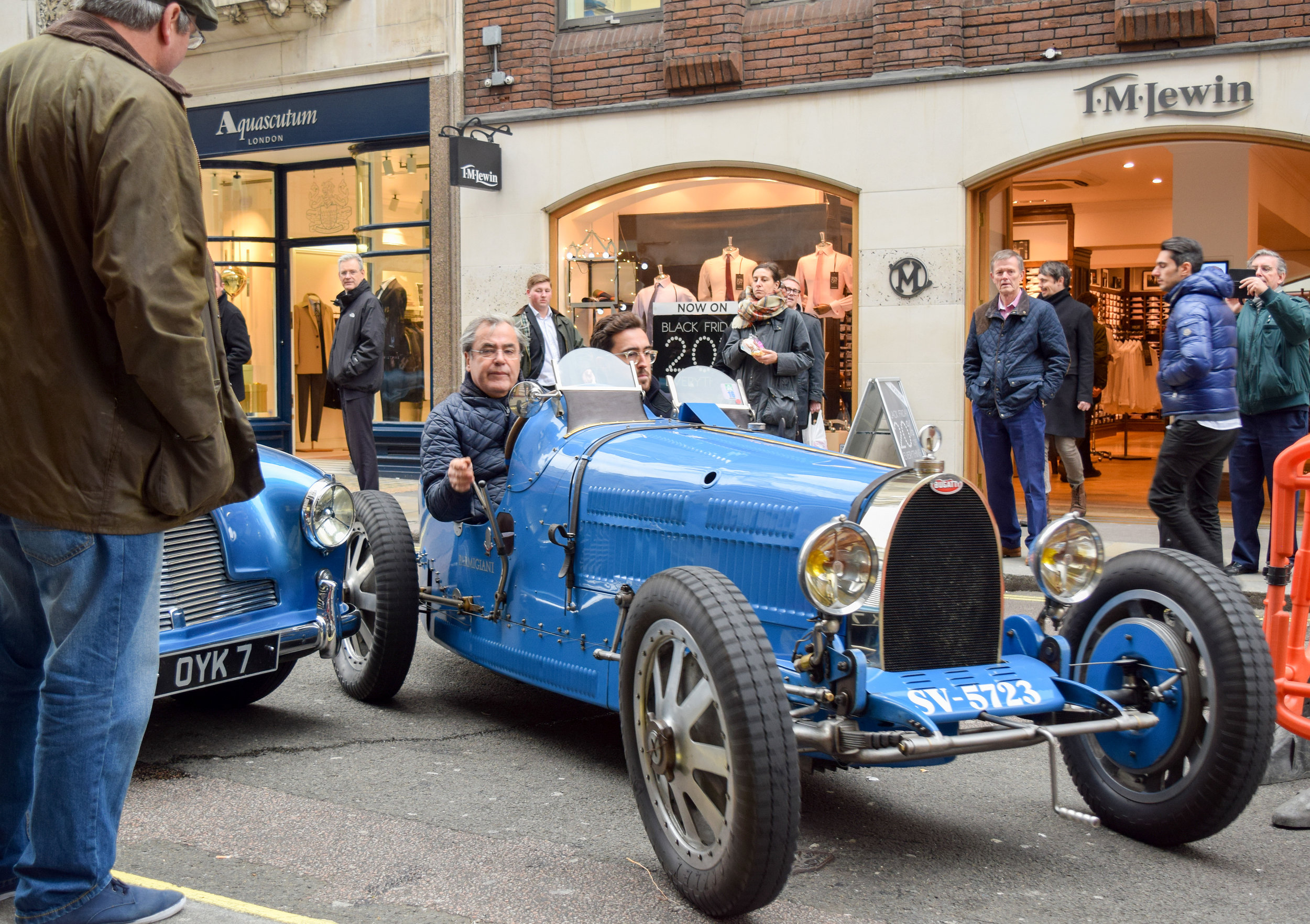 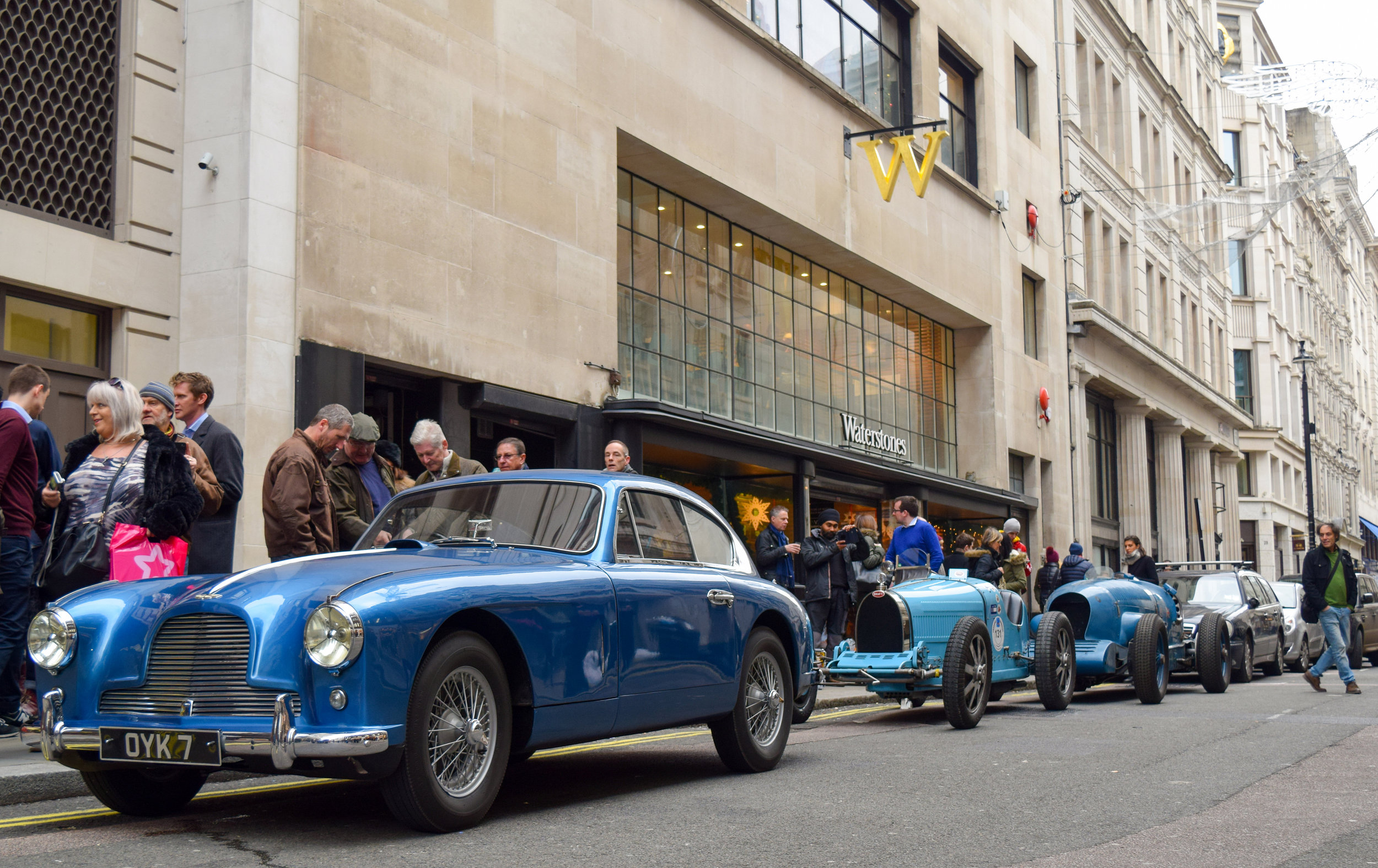 Gillian was spoilt for choice about which car to try and photograph. 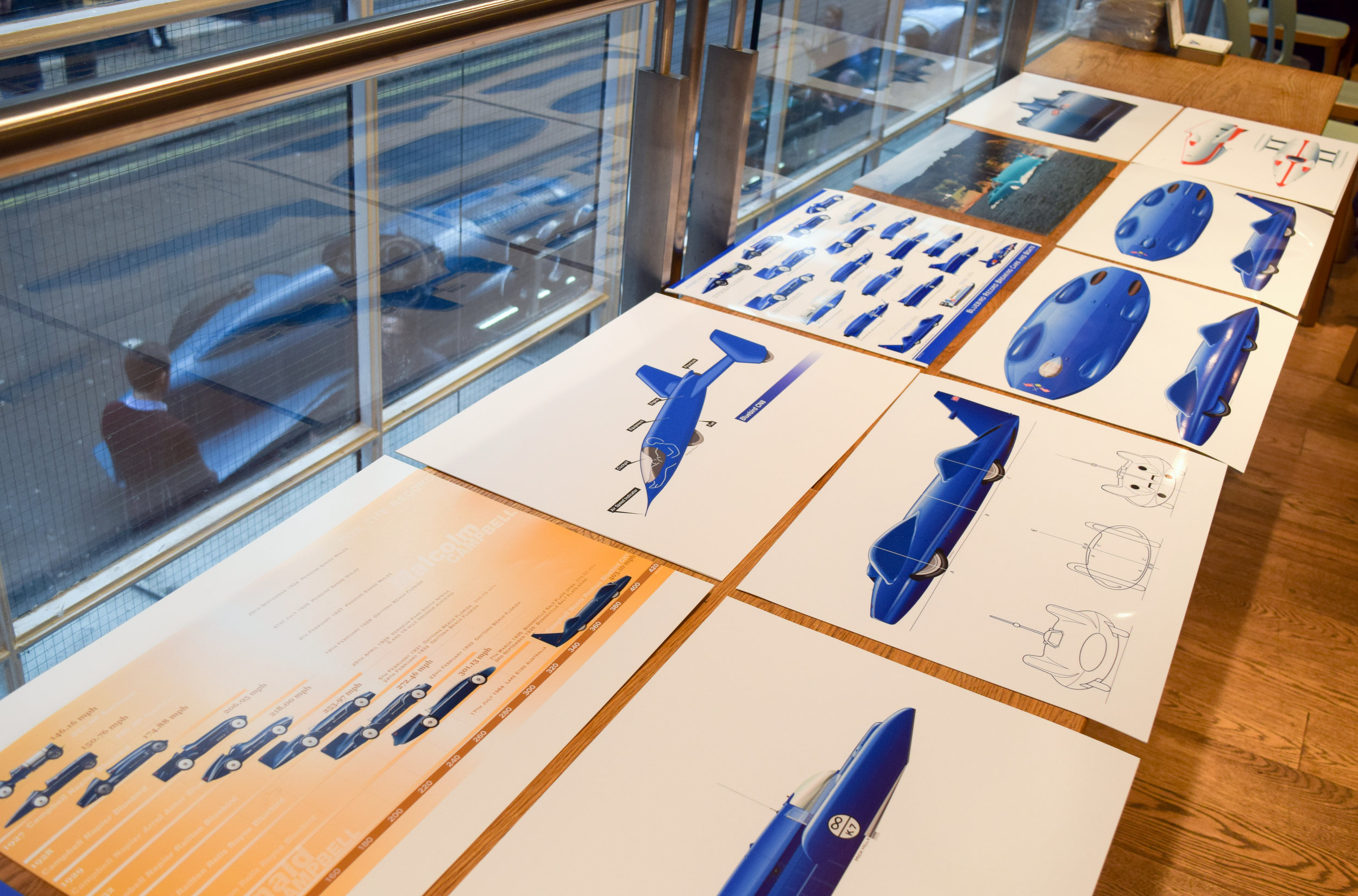 A selection of art prints were avaialbel on the day. 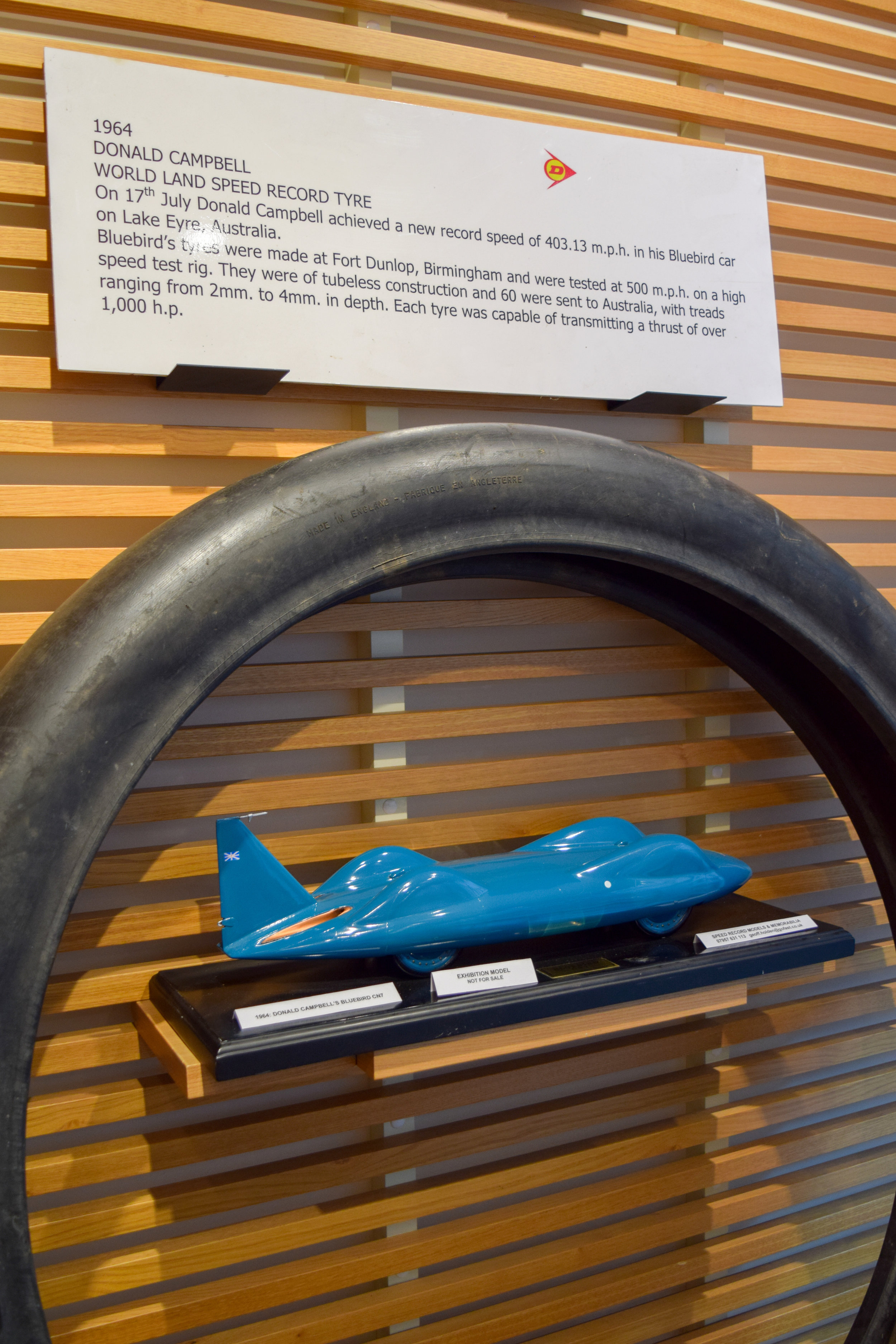 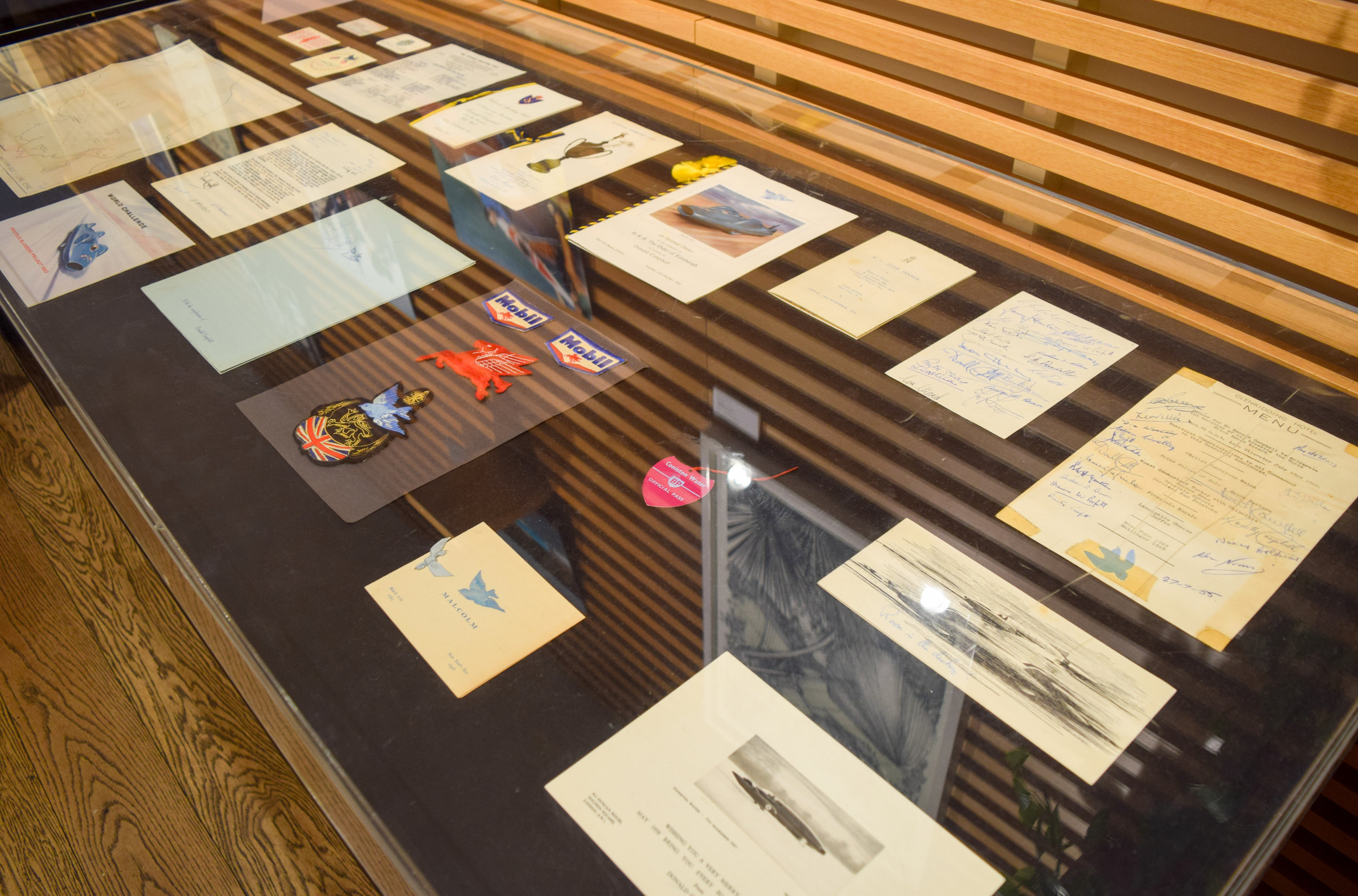 A curation of Campbell memorabilia. 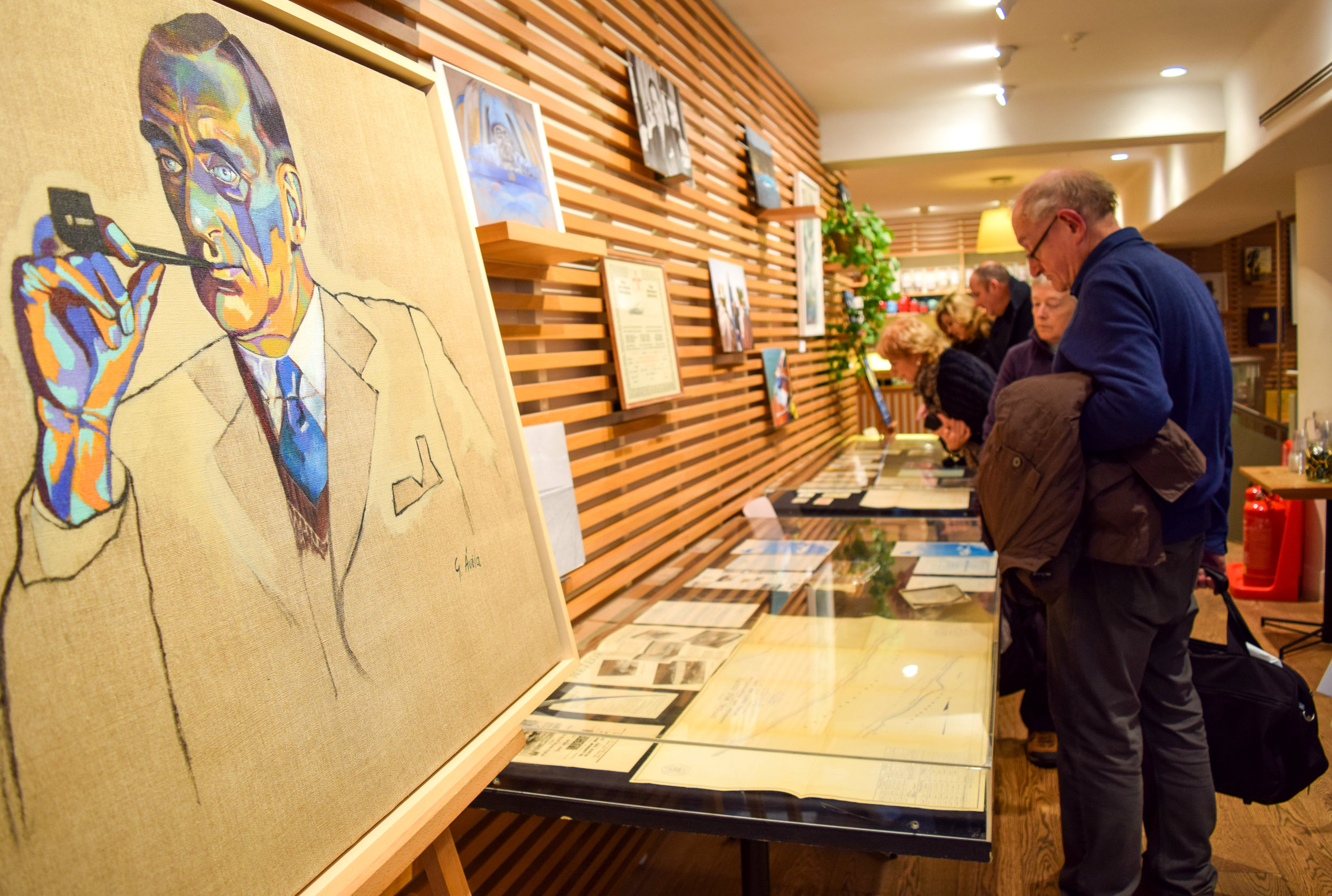 We think this would liven up any room in which you place it. 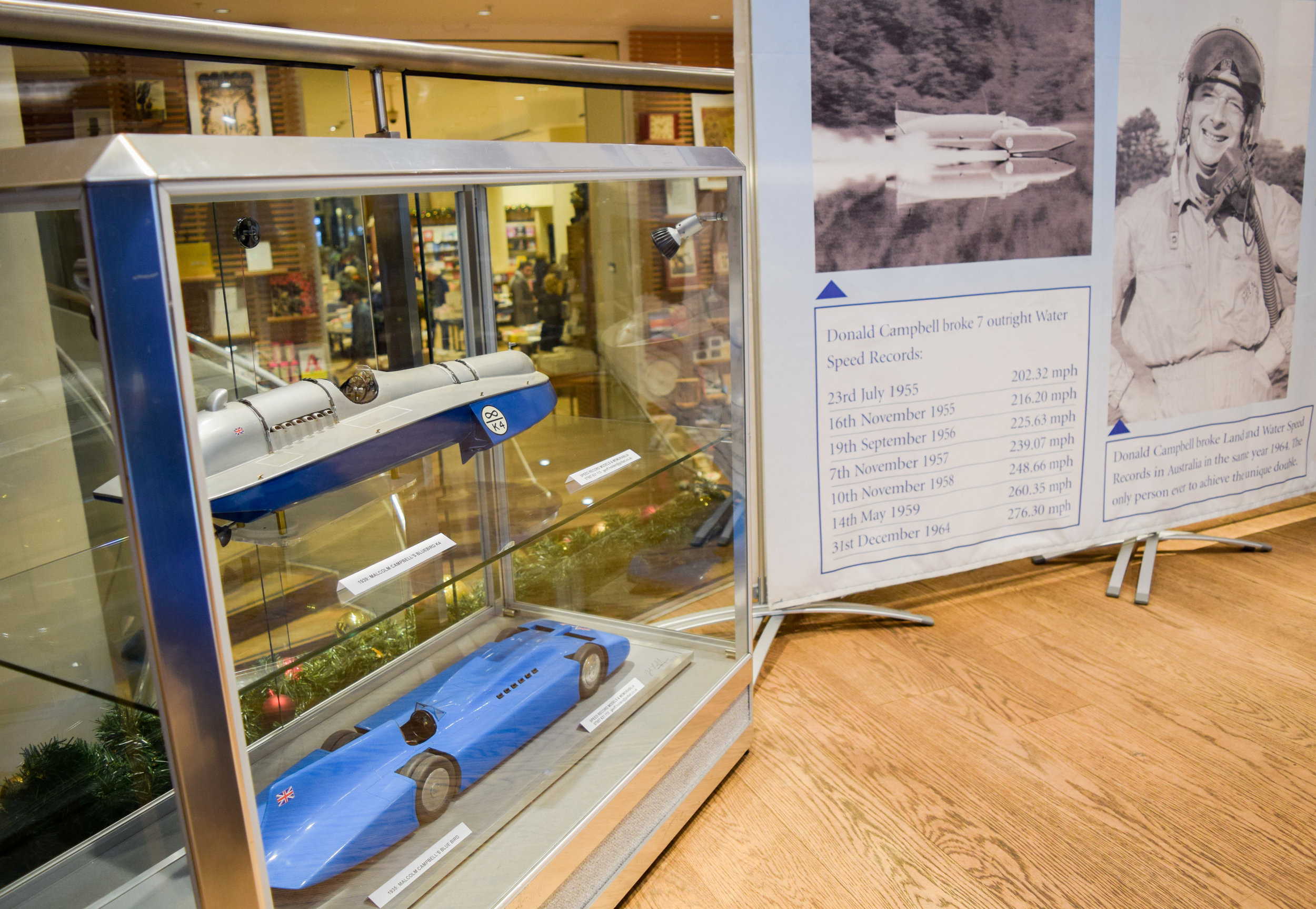 Corgi haven't got anything on these... 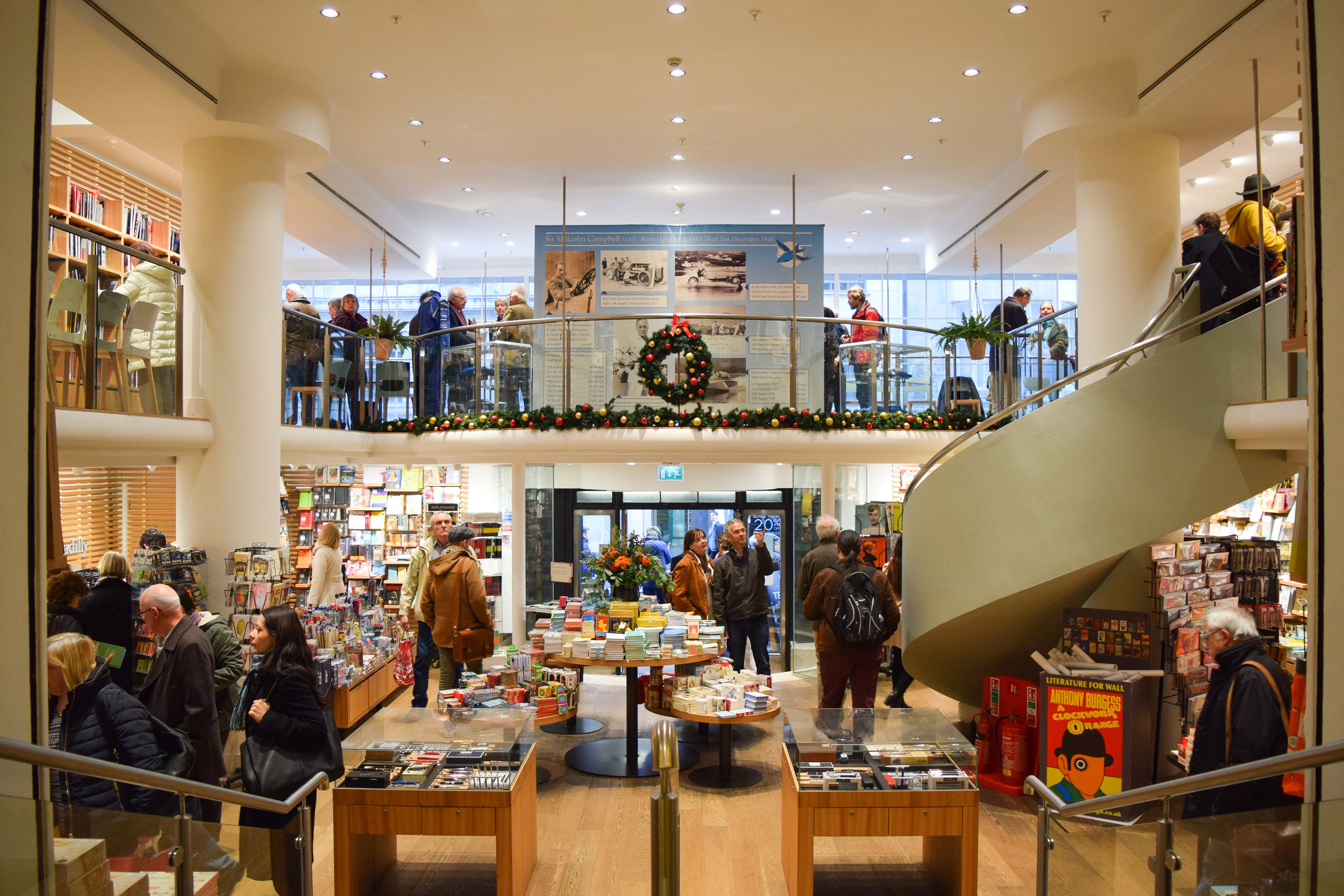 It was certainly popular! The number of visitors left Gina Campbell pleasantly surprised. 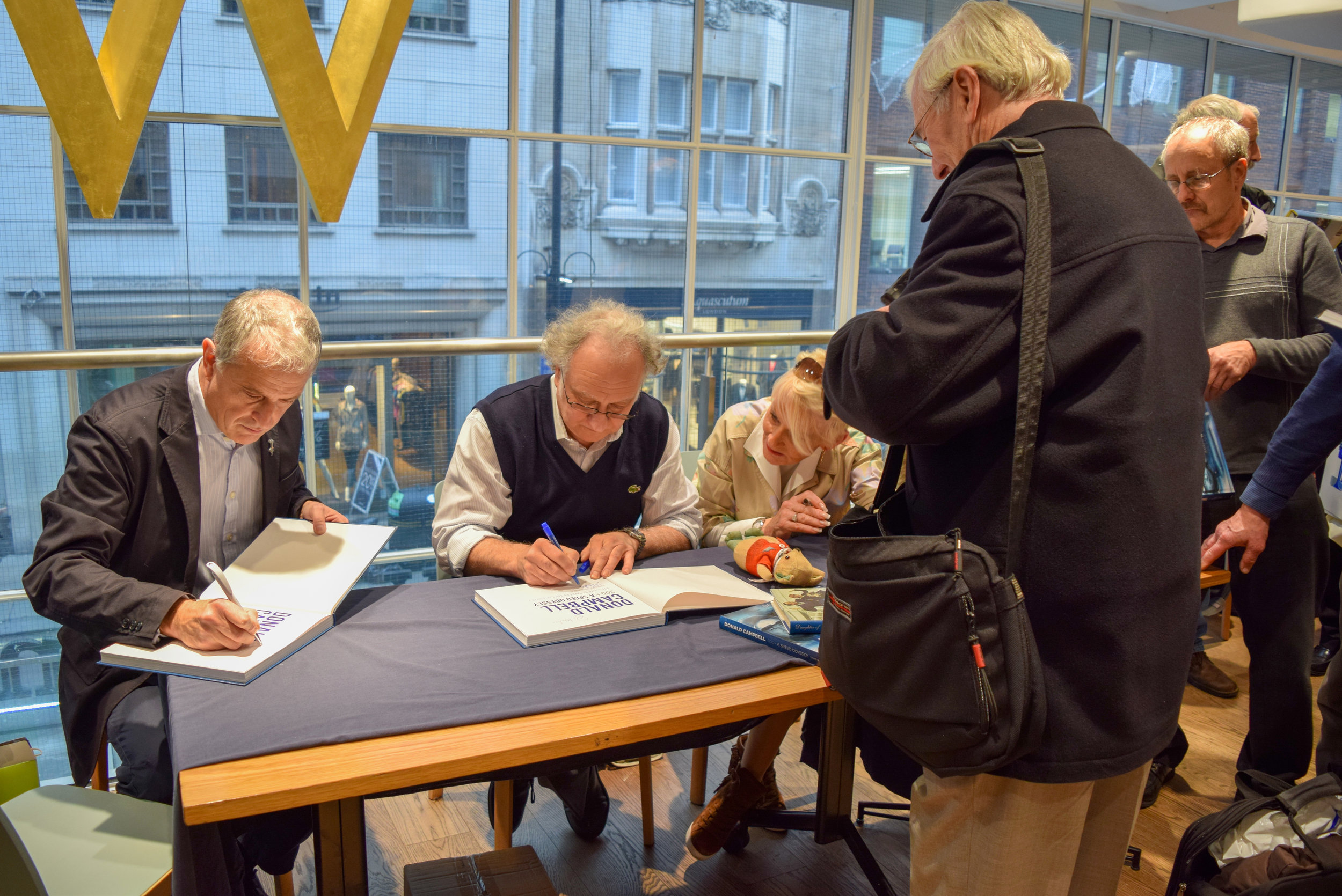 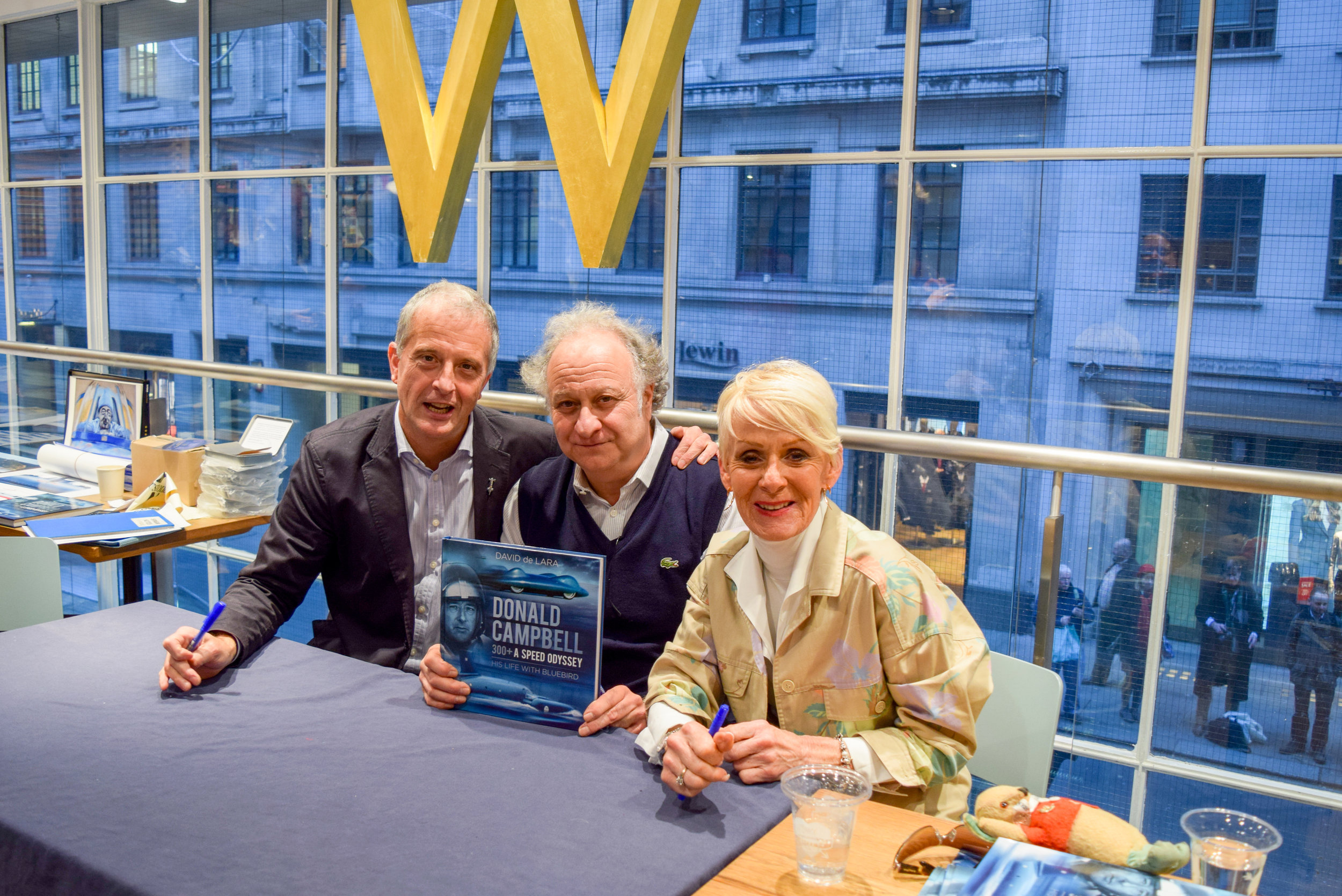 Don Wales, David de Lara and Gina Campbell smile for the camera. Mr.Whoppit appears to be exhausted and temporarily out for the count. 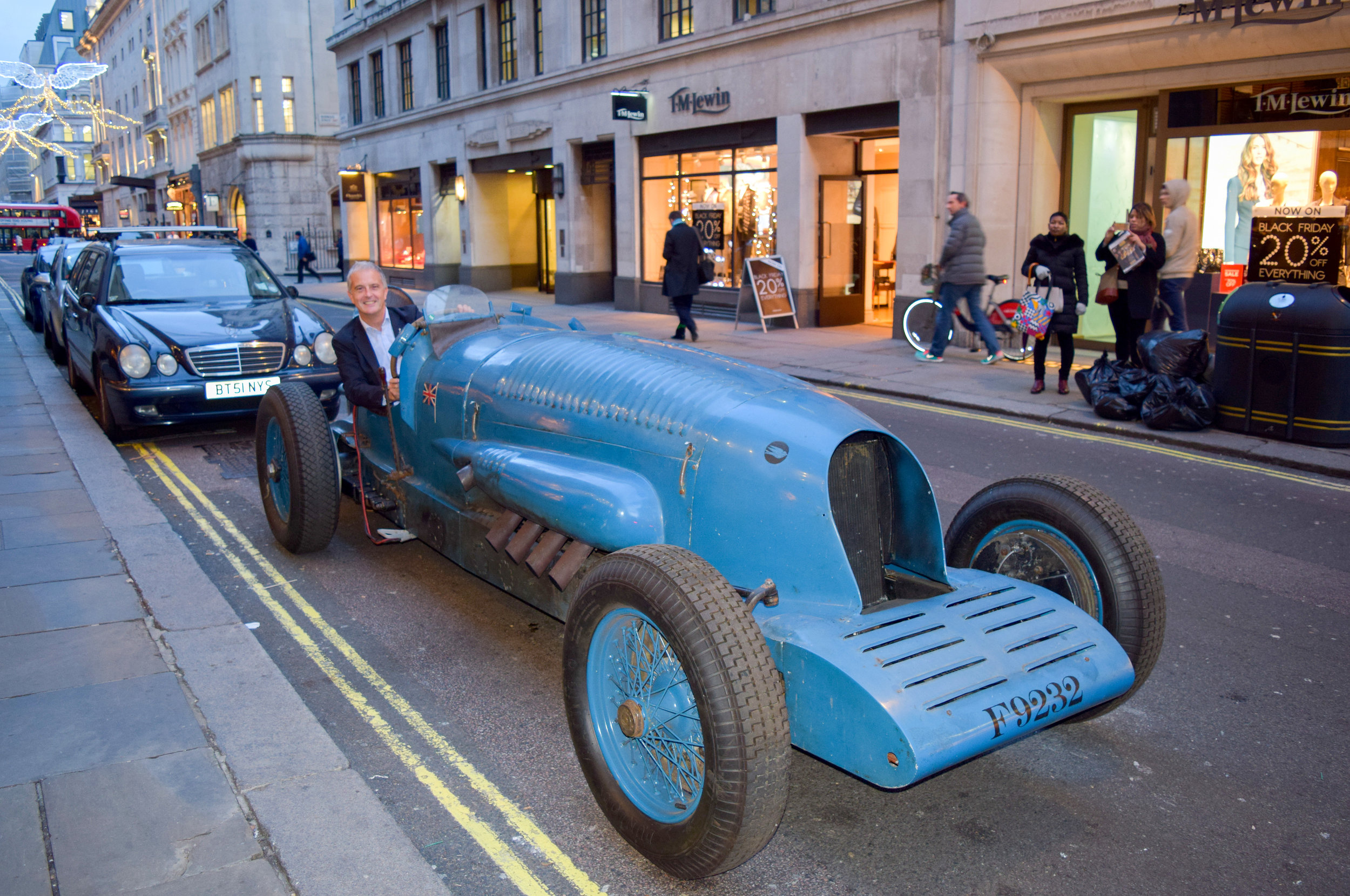 Don and the Bluebird Replica 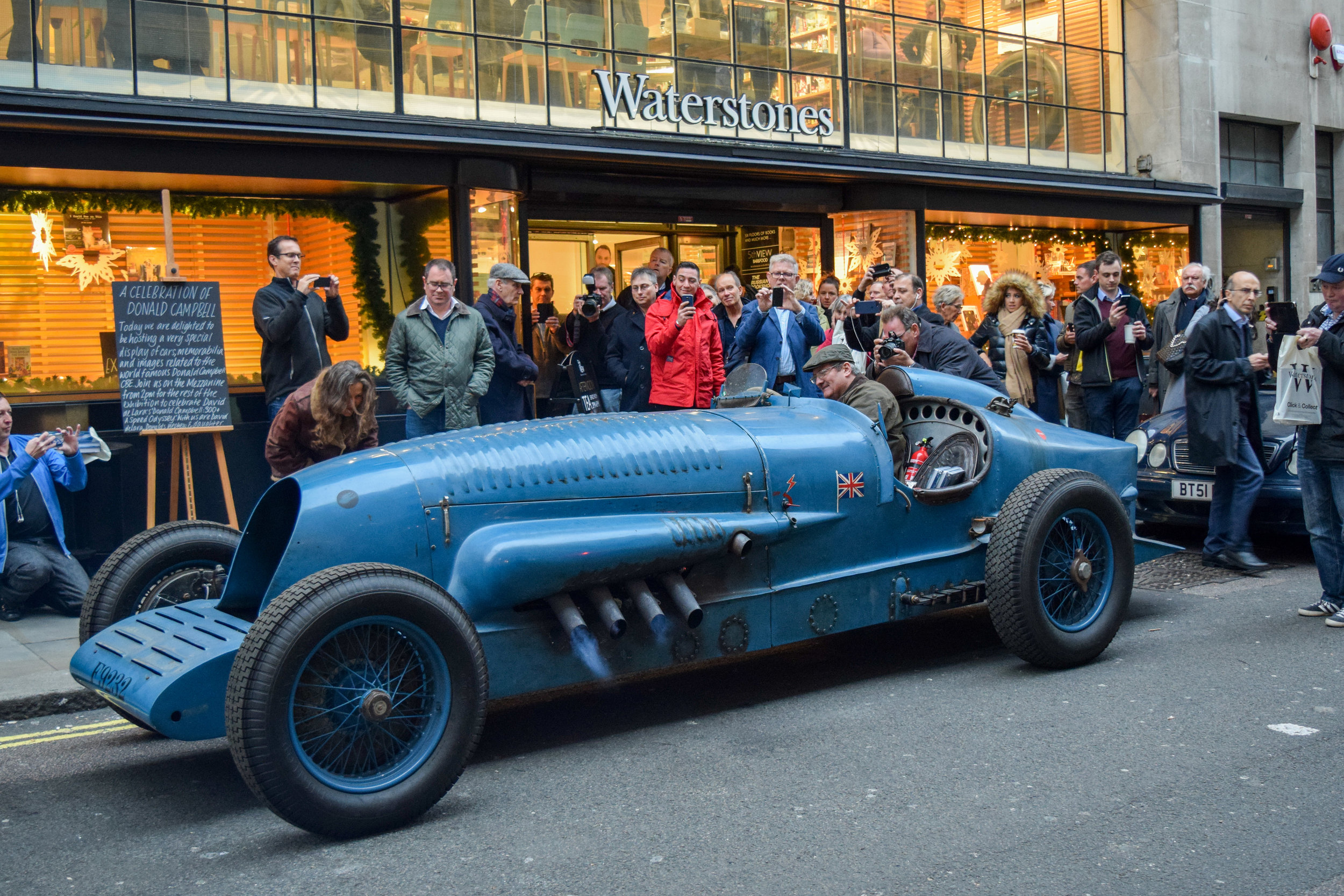 Fire up the Bluebird!

As owner Lorne Jacobs fires up his replica, crowds gather as the flames shoot out of the engine's many exhausts. 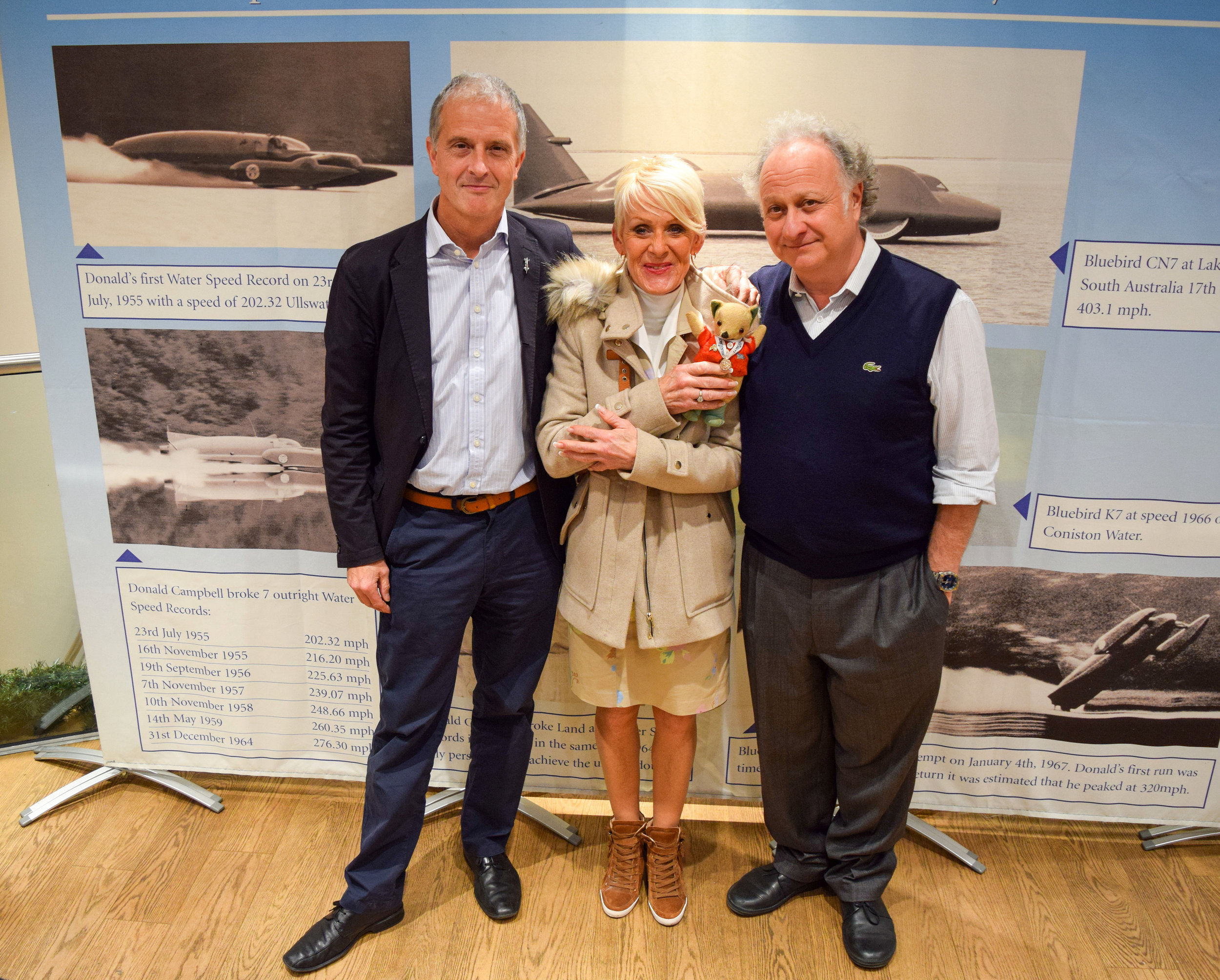 It’s not everyday that you get invited to London to attend a book launch - let alone a book launch where Piccadilly grinds to a halt as three glorious sports cars once owned by Sir Malcolm and Donald Campbell park up on the street. The book in question is David De Lara’s ‘Donald Campbell: 300 +, A Speed Odyssey’.  And CCFS were lucky enough to send Gillian Carmoodie along for a chance to talk with the author and the Campbell family.

It was worth getting lost, floundering in a panic through King's Cross station after a battle to find the right underground platform. Being greeted by a line of historic, desirable classic cars is payment enough for any of London’s infamous anguish. However, these particular vehicles hold more history, daring-do and adventure behind them than any celebrity’s Chelsea tractor. These stunning vehicles come straight out of the legendary Campbell-family background.

‘It’s been great to bring my car to London,’ Lorne Jacobs, owner of the 1927 Napier-Campbell Bluebird replica, beamed. ‘I’ve been meaning to do it for a long time.

The car got a fair bit of attention when we started it up.  The crowd like that - they like the pops and the bangs.’

And no wonder. With flames, backfires and enough noise to waken the dead, there is seldom a chance in today’s modern environment to bring such excitement into London without raising suspicion. The car in question is a replica of the 1927 Napier-Campbell Bluebird, housing a 24-litre Napier-Lion engine pumping out 700bhp at 2,200rpm. Sir Malcolm Campbell set a record of 174.883mph on Pendine Sands with the original, forever lost, vehicle - having achieved a peak speed of 195mph during the attempt.

Nestled in the offerings is Donald Campbell’s Aston Martin DB2/4, with swathes of admirers practically drooling over the svelte bodywork, accompanied by two vintage Bugatti racing vehicles, piloted by Sir Malcolm Campbell during his motor racing career - when real men raced in situations that would leave the likes of Lewis Hamilton rocking back and forth in a state of panic.

It took a while to peel myself away from the platter of fine automobiles on Piccadilly’s Jermyn Street - historically known for selling men’s wear, with the building currently housing Waterstones once being the proud residence of ‘Simpsons of Piccadilly’ - officially opened by Sir Malcolm himself in 1938.  In it’s day it was the largest men’s wear department store in Europe. Today, it is currently Europe’s largest bookshop, with over five floors of reading material. However, once inside the surprise was to be greeted by Don Wales, Donald's nephew and Gina Campbell, Donald Campbell's daughter.

Clutching a teddy bear, Don smiled before explaining: “I’m just looking after Mr. Whoppit for Gina.  He was outside and he was cold.”

Mr. Whoppit - to those who don’t know - was Donald’s mascot, who was carried everywhere in a wide variety of Donald’s personal cars - from Land Rovers to Jaguars - and also during the speed record attempts. The adopted bear was on board the famous hydroplane Bluebird K7 during the fatal accident, having travelled at over 328mph.

‘With it being the 50th anniversary coming up of Donald’s accident it’s important that people remember Donald for who he was, not just necessarily for the crash, but also for the fantastic achievements that he did and his efforts at representing Britain.  It’s also nice to remember the Norris brothers and their marvellous engineering with both the car and the boat.’

Don by profession is a photographer, although he has claimed speed titles of his own - including a Guinness World Record for a sit-on lawnmower, travelling at 87.833mph.

Sitting beside Gina Campbell as she signed over 100 purchased copies that afternoon, I asked for her thoughts on the event.

‘It’s been a really good day.  Anything that furthers the Campbell name is great.  We’ve come along to offer our full support to David.  He’s put an awful lot of effort and hard work as well as his own time and money into the book.’

The author, David De Lara, well known for his prior works covering his personal interest in land speed records, explained the reasoning behind his well-earned smile.

‘The book took 6 months to put together after some 25 years of research.  The idea was to find a different approach from my first book and to make this a personal account of Donald Campbell.

The book starts off with Donald’s own words and continues to work through to when there are no more writings from him. The overall idea was to get to know the man.’

And, after having read the book and had the pleasure of Don and Gina’s company, I feel that I not only got the chance for a closer look at one of my heroes, but was also allowed an insight into his family. We even had some Shiraz wine together, of which I hope Donald and Sir Malcolm would have approved of.

Copies of the book can be purchased from Amazon. Special editions come with a DVD and a limited edition print that was done for the 50th anniversary of Donald’s double record year.

David’s previous literary works include ‘The Unobtainable: A Story of Blue’ and ‘Leo Villa’s Bluebird Album’ can be purchased on Amazon.