Best offers considered now. Listed Price £89,000. 1954 very rare aluminium head SE genuine factory original RHD Jaguar XK120 DHC SE, special equipment stamped aluminium head F3878-8S. This SE is a very rare car one of the last to have the Aluminium Head (S) stamped with twin exhausts. Original 1954 right hand drive Jaguar XK120, DHC, Drop Head Coupe. The car is also for sale on another website. I have a few little jobs that I want the garage to do in the next few weeks including a service, plugs points, filters, new oil etc. The car has a Jaguar heritage certificate, matching numbers proving authenticity with original V5 Reg:NRW 356. This car was the last 1 of only 294 Original RHD Jaguar XK120 DHC SE Built 10 August 1954 and left the Browns Lane Factory on 04 Oct 1954. Purchased by Mr Wallace Cartwright he was the first owner and also a car distributor and collector, who First Registered: NRW 356 new from the Coventry factory, and kept it in a large personal collection for many years. A very fine example of the rarest of all the jaguar XK120 variants produced, the car has Matching Numbers VIN/Chassis No: S667294. With the original engine no: F3878-8S. On the aluminium head (S) that is on all SE special equipment models. Not the steel cast block as is on the standard models. You can see quite clearly that this car has the original engine number (S) :F3788-8S on the aluminium engine block proving that it is an original special equipment vehicle 1954 Jauguar XK120 RHD DHC SE, and gearbox No: OSL80B, all the official numbers that count have been taken directly from this car. Wind up windows, wire wheels plus spare wheel, 2 original rear wheel covered spats, 4 extra spare wheel hubs and 4 extra hub-caps, I also have an extra set of new bucket seat backs in Black leather to match the car. Sell best offers. 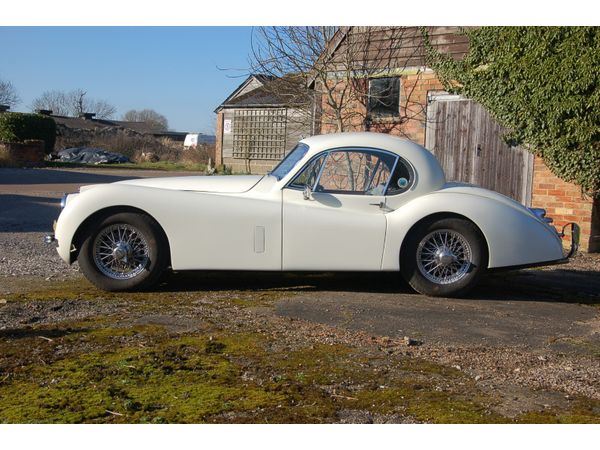